The Bureau of Immigration (BI) clarifies that foreign seafarers who hold valid 9(g) visas are allowed to enter the Philippines.

BI Commissioner Jaime Morente stated that the following advisory came from the latest Inter-Agency Task Force for the Management of Emerging Infectious Diseases (IATF-MEID), allowing foreign seafarers to enter the country via airports and seaports.

Morente added that the measure is to give way to seafarers undergoing crew change in the Philippines’ green lanes.

maritime vessels and facilitate the movement of sailors in the region during the pandemic.

Decampong stated, “The entry of foreign seafarers [who] will undergo crew change is essential in keeping the maritime industry afloat. They are much-needed manpower, especially in cargo vessels that transport goods in and out of the country.”

Only Filipinos, their parents, spouse, and children who are traveling with them are allowed to enter the Philippines. However, such individuals must possess a valid and existing visa at the time of entry.

Moreover, diplomats and members of international organizations, along with their dependents, are allowed to enter the country with a valid 9(e) or 47(a)2 visa.

Decampong noted that “Foreigners arriving for emergency and humanitarian cases may also be allowed to enter, as approved by the chairperson of the NTF COVID-19 or his duly authorized representative. Foreign nationals involved in medical repatriation duly endorsed by the Department of Foreign Affairs – Office of the Undersecretary for Migrant Workers Affairs (DFA – OUMWA) and Overseas Workers Welfare Administration (OWWA).”

Such foreign nationals must be able to present a valid Philippine visa at the time of entry.

The Bureau of Immigration (BI) clarifies that some foreign nationals with BI-issued visas will be required to obtain a travel pass on their departure from the Philippines. 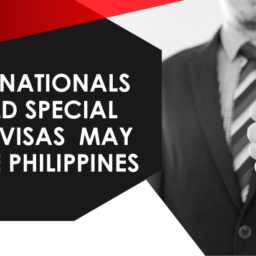 The Bureau of Immigration (BI) released an advisory on Monday, June 7, allowing foreigners with special resident retiree’s visas (SSRVs) to enter the Philippines.